I’d read about skiing the toll road. Listened to others tell their stories. But I never made the effort to ski to the top and back down. My brother and I would talk about it and concoct grand plans.

I imagined a long, glorious run floating atop soft powder.  Our discussion always ended the same way: “We really should ski the toll road someday.”

Someday arrived in early December under bright blue skies and with cool temperatures.

Skiing the Whiteface Veterans Memorial Highway is an Adirondack tradition, especially early in the season. Happily, it’s a tradition I can now easily participate in. My wife, Tracy, and I recently became full-time North Country residents. (Tracy is the publisher of the Explorer.)

I left Saranac Lake at 8 a.m. Temperatures were in the mid-twenties. Perfect conditions for the long trek up the toll road.

By 9 a.m. I had my three-pin boots laced up. I shouldered my ancient hickory skis—salvaged from my parents’ basement—and began hiking up the road. The snow cover for the first mile and half was very thin, with the yellow center lines showing through.

At 4,867 feet, Whiteface is New York’s fifth-highest peak. The two-lane highway climbs more than 2,300 feet in elevation over five and a half miles, starting at a Tyrolean gatehouse and ending at a handsome stone building known as the Castle. From there it’s a short hike to the summit.

As I ascended the road, I occasionally passed a picnic table with a sweeping view of the Adirondacks. It was a challenge not to stop at each one and soak in the scenery and the sunlight. I did pause a few times to admire the hewn rock and roadside ice formations. Ancient anorthosite bedrock was draped in spongy green moss. A bit higher up the moss assumed a crimson color. Red squirrels crisscrossed the road collecting stores.

I’ve wanted to try backcountry skiing for a while. Granted, a two-lane road is probably not what purists would call a real backcountry-ski experience, but the trail guidebooks called it a wonderful introduction to the sport.

I walked uphill for about a mile and a half before I put on my skis somewhere around three thousand feet in elevation. I skied some and walked some until I reached the hairpin known as the Lake Placid Turn. This is a nice spot to take a break and enjoy the spectacular view west toward Lake Placid and the McKenzie Mountain Wilderness. Next time, I’ll pack an ice scraper to clear snow and ice off the picnic table.

Leaving this hairpin, I skied about a mile more up to the Wilmington Turn. The sharp turn was a windblown sheet of ice, so I stashed my skis and walked the rest of the way to the Castle.

In summer, the Castle houses a restaurant for the tourists who drive up the toll road. In winter, it’s coated in rime ice. Though the building is closed in winter, skiers can find refuge in its two archways from the strong the winds that often lash Whiteface’s summit. On the day of my adventure, however, the air was calm. I poked around the Castle for a while and then climbed the many stone steps that lead to the summit’s weather-observatory tower—and a stupendous panorama.

After enjoying the view, I hiked back down to my skis. Soon I was gliding downhill, unhurried and a little unsteady, passing frost-covered evergreens and old stone walls. My wooden skis, glossy and brown, slid easily over the sparkling white snow. I hadn’t seen a soul all morning, so I was startled to see what looked like a miniature snowcat rolling up the road. One of the occupants flashed a friendly peace sign. Evidently, they were part of the crew working on the elevator that rises from a tunnel beneath the summit to the weather observatory.

The tracks of the mini-cat ground up the crusty snow, leaving a soft path of frozen granular snow. It was a nice track and easy glide back to the picnic table where I had lunch.

A moisture-wicking long-sleeve shirt and a pullover shell were the perfect duds today. I brought a change of shirt, expecting a sweaty ascent. No need to change. The surface was so hard packed most of the way that the uphill was easy going.

My sunny lunch spot offered a welcome break. The mini-cat passed by again, softening up more tracks. The afternoon was warming up.

Resuming my descent, I soon encountered a layer of slick boilerplate over ice. Evidently, such conditions are not uncommon early in the season. The smooth, easy gliding was over.

The toll road didn’t ask much of me as a skier. It’s long, straight, and wide. A green circle by resort standards. Where I found deeper snow I was able to float on top of frozen granular. Downward pressure on one ski or the other was enough to control my speed. A braking wedge worked well on soft-packed snow.

But at lower elevations—below three thousand feet—the ice and fast conditions demanded more from my old cross-country skis than they were prepared to give. Checking and controlling speed was a challenge, especially on the packed surfaces. I needed an edge. 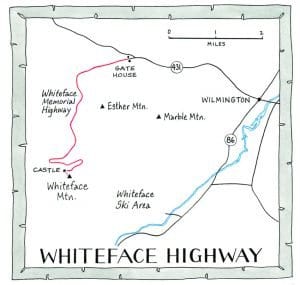 I like these old skis. They’re kind of nice on friendly rolling terrain. But absent a metal edge they are ill-suited for a fast track. Still, the old boards in no way diminished the outing. In fact, they revealed a newfound wisdom. Stop and walk around the dicey spots and live to ski another day with proper backcountry skis.

I’m thrilled to call the North Country home. As soon as I pulled away from the gatehouse, I started making plans for my next ski outing.

I really should ski the toll road again someday. Soon.

DIRECTIONS: From the four-way intersection in downtown Wilmington, turn onto NY 431 and head uphill. At 2.9 miles, bear left at a junction and continue 0.2 miles to the gatehouse. Park along the road.