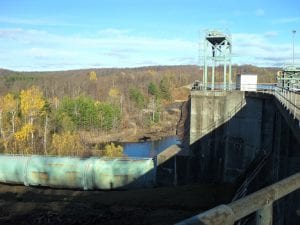 Federal authorities have granted the utility operating a power dam on the Ausable River near Lake Champlain another year’s postponement on its requirement to install a fish passage system.

According to FERC, the utility’s renewed license for its nearly three-megawatt-capacity hydroelectric station at Rainbow Falls requires the fish passage.

Monitoring now will be required next May, with reports due at the end of 2019 following consultations with New York’s Department of Environmental Conservation and the U.S. Fish and Wildlife Service.

NYSEG cited ongoing project delays due to damage caused by Hurricane Irene in 2011 in requesting another extension.

In a March report on planned capital projects over the next five years, the utility said Rainbow Falls work includes “resurfacing of the spillway along with infill of the portals, commissioning of the new fish bypass, an environmental improvement required as part of NYSEG’s license with the FERC.”

The Adirondack Council, which sued in 1991 to add environmental improvements among conditions for federal dam licensing, questioned the need for the repeated extensions.

The earlier the river is returned to its natural function, where fish can cross the dam, the better, spokesman John Sheehan said. “We don’t know what was causing the delays in this case,” he said.

So-called fish ladders are needed where dam spillways are too high for fish to jump over, Sheehan said.

NYSEG did not immediately answer queries from the Explorer.

The DEC agreed to NYSEG’s request to postpone its required “Downstream Fish Monitoring Effectiveness Plan,” noting the hydroelectric plant was damaged by heavy flooding during Irene and its turbines have not been operating since. The study needs to be done while they operate to determine effectiveness, according to the department.

The Ausable empties into Champlain about 5.5 miles downstream.

Reintroduced salmon in the lake make two runs annually in the Boquet, Saranac and Ausable rivers, attracted upriver in the spring by warmer water and in the fall when they return to their home rivers to spawn, according to the DEC.