Home » Stories » A place to gush about 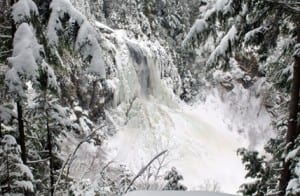 OK Slip Falls is one of the tallest waterfalls in the state.
Photo by Susan Bibeau

Someday, hikers and skiers will be able to visit OK Slip Falls, one of the hidden wonders of the Adirondacks.

We’re taking a ski trip into the future, following old woods roads and trails to the brink of a gorge that overlooks OK Slip Falls, one of the biggest cataracts in the Adirondack Park.

OK Slip Falls, at least to my mind, borders on the mythic. With a drop of 250 feet, the cascade ranks high among the Park’s natural wonders, yet it has long been a forbidden place. The timber company Finch, Pruyn & Co., which owned the falls for decades, kept the public out.

In 2007, the Adirondack Nature Conservancy bought all of Finch, Pruyn’s land—some 161,000 acres, including other natural gems such as Blue Ledge in the Hudson Gorge, Boreas Ponds near the High Peaks, and the Essex Chain of Lakes in the central Adirondacks. The Hudson and OK Slip gorges contain dozens of species of rare mosses and other plants.

All of the former Finch land remains closed to the public for now, but the state has agreed to buy 57,000 acres from the conservancy and add them to the Forest Preserve. When that happens, those acres will be open to the public for hiking, cross-country skiing, paddling, fishing and other outdoor pursuits. The state also plans to protect nearly all the rest of the former Finch lands with conservation easements that will permit some public access.

The OK Slip Falls tract, encompassing 2,950 acres, is slated to be added to the Forest Preserve. Presumably, it will become part of the Hudson Gorge Primitive Area. Besides going to the falls, visitors will be able to gaze out at the Hudson from atop Blue Ledge, loll on sandy beaches along the river, and camp or fish at several interior ponds.
Michael Carr, executive director of the Adirondack Nature Conservancy, says the Finch lands will be transferred to the state in stages and the OK Slip tract will be “part of the first wave.” He hopes the transfer will take place this year.

But with the state facing a $13 billion deficit, land purchases may be put on the back burner. State Sen. Betty Little, who represents the Adirondacks, is calling for a temporary ban on state land purchases (see Page 42). Although environmentalists don’t believe that Gov. David Paterson will go along with her, they do worry about a shortage of money for land deals.

Paterson wants to slash the Environmental Protection Fund from $300 million to $205 million. Typically, about a third of the fund is used for land preservation. More worrisome than the EPF cut, environmentalists say, is the governor’s proposal to change the funding source from the real-estate transfer tax to unclaimed bottle deposits.

Bottlers and stores now keep the deposits on beverage bottles that consumers fail to redeem, but Paterson is pushing for legislation that would turn over that money to the state. In fact, his budget assumes that the state will collect $118 million in bottle deposits for the EPF.

The problem is that the bottle bill might not pass. The bottling industry has killed similar legislation many times in the past, according to Neil Woodworth, executive director of the Adirondack Mountain Club. If it does so again, he warns, the EPF would be reduced to just $80 million. What’s more, he says, the state probably would allocate a smaller percentage than usual to land preservation, given that the EPF is used for a wide range of other environmental projects, some of which cannot be put off.

“If we’re talking about an $80 million EPF,” Woodworth says, “it would take many years to put together the money to buy the Finch, Pruyn lands.”

That would be bad news for the Adirondack Nature Conservancy. In 2007, the group borrowed $110 million to pay for the Finch property. At the time, the conservancy hoped to sell the lands—some to the state, some to a timber company—within three years. Meanwhile, it has been responsible for interest on the loans, real-estate taxes, land-management expenses and other costs associated with the property.

Even after reselling the land, Michael Carr says, the conservancy will have sunk $35 million into the deal. If the state delays, the organization will have to spend millions of dollars more. “We budgeted for three years, and that’s the timeline we’re all working on,” he says.

The state Department of Environmental Conservation apparently is committed to buying the land and easements, but DEC spokesman Yancey Roy refused to say when. Asked a series of questions about the deal, he replied with a one-line statement: “We are continuing to talk with the Nature Conservancy about the process.”

In any event, someday the public will be able to ski to OK Slip Falls. On the day of our trip, a small caravan follows Michael Carr to a gated road off Route 28 between the hamlets of Indian Lake and North Creek. Also along for the trip are Connie Prickett, the conservancy’s spokeswoman; Melissa Eisinger, Carr’s assistant; Kevin Redmon and Caitlyn Olson, students from Middlebury College; Michael Virtanen, an Associated Press reporter, and Susan Bibeau, a photographer for the Explorer.

We park at the start of the woods road and head uphill on skis through a hardwood forest. Though unplowed, the road has been packed down by a snowmobile. A caretaker uses the road to reach a Christian boys camp on OK Slip Pond. The Northern Frontier Camp owns 32 acres, which will remain a private inholding after the state buys the surrounding land.

Not all the tracks on the road are from snowmobiles and skis. Melissa, who is in the lead, notices the prints of a “perfect walker”—an animal that places its rear paws in the tracks of its front paws. At first, she surmises that the tracks were made by a bobcat, but someone else suggests the animal might have been a fisher. Eventually, Melissa concludes they most likely came from a fox.

After several small ups and downs, we come to a long descent that bends first to the left, then to the right. At the bottom, those in front wait for the others to catch up. Everyone is exhilarated by the schuss. “We had an altercation on the hill,” Mike Carr yells, laughing. “Two vehicles moving at different speeds.”

Soon we pass a deer carcass. Connie explains that the caretaker found the dead deer along a highway and brought it here to feed the eagles that have been hanging about the property this winter. The carcass has been eaten through clear to the ribs. We notice strange designs in the snow where, we suppose, birds landed with morsels of meat. We don’t see any eagles, but we do see some ravens overhead.

About two miles in, we leave the main road to follow an old logging road. This is narrow and bumpy, more like a trail. With the exception of two challenging descents, the terrain is gentle. After a mile or so, we exchange our skis for snowshoes and walk the final few hundred yards (this part of the trail is steep and narrow).

Connie leads us to an opening in the trees at the very edge of the gorge. A cord strung between two trees warns us not to get too close. I can’t help noticing the deer tracks on the other side of the rope: A hungry white-tail had ventured within a foot or two of the precipice to nibble on an evergreen.

The falls are frozen: Enormous columns of blue ice rise out of a massive mound of snow. I imagine the sight is even more impressive close up. Although the trail continues to the base of the falls, we don’t have the time to go any farther. Instead, we break out our parkas and sandwiches and enjoy the view as we munch away. As if we don’t have enough to content us, Connie hands out homemade cookies flavored with maple syrup and cranberries.

Our bodies generated a lot of heat on the ski in. After standing around for 20 minutes, we are reminded that it’s cold outside, maybe 10 degrees. The desire for warmth overcomes our reluctance to leave this beautiful spot, and so we walk back to our skis and begin the calorie-burning journey back to the cars. We know we’ll be able to return someday—even if it’s not this year.