The Adirondack Park Agency is poised to classify Lyon Mountain as Wild Forest—a decision that would run into opposition from the Adirondack Council, one of the Park’s leading environmental organizations.

Brian Houseal, the council’s executive director, said he would like to see the Lyon Mountain tract classified as Primitive, with an eye toward eventually classifying it as Wilderness, the strictest of the APA’s nine state-land zoning categories.

“There’s no Wilderness now in that sector of the Park,” Houseal said after the APA’s meeting last week.

Located in the northeastern Adirondacks, west of Plattsburgh, 3,830-foot Lyon is one of the Park’s tallest mountains outside the High Peaks region. The state acquired it from the Adirondack Nature Conservancy late last year.

On Friday, the APA voted to send to public hearing a proposal to classify 91 parcels of Forest Preserve scattered throughout the Park, totaling 31,780 acres. Most of the parcels are small, encompassing less than a hundred acres. At 17,190 acres, the Lyon parcel is by far the largest.

Houseal pointed out that the Adirondack Park State Land Master Plan permits parcels greater than ten thousand acres to be classified as Wilderness.

Lyon Mountain has nonconforming facilities, including a fire tower and an access road, that make it ineligible for Wilderness designation now. The land also contains ruins of old ski lifts and evidence of former ski trails and logging roads.

The APA staff cited the “extent of established facilities” on the land as one reason for designating it Wild Forest, a less-strict classification that would permit the fire tower and the road to remain.

Houseal, however, argued that the parcel could be classified as Primitive and managed as Wilderness until the nonconforming facilities are removed. “It’d be a Wilderness-in-waiting,” he remarked.

The APA expects to hold public hearings on the classification proposals early next year. They could be modified, based on comments received.

Also included in the land-classification package is a 6,132-acre parcel near Tahawus acquired from the Open Space Institute in January 2009. The APA staff recommends that this be added to the High Peaks Wilderness.

The institute retains the right to generate electricity from the dam at Henderson Lake. The power would be used by the nearby Masten House, which the institute is leasing to the state College of Environmental Science and Forestry. To accommodate the institute, the APA staff recommends that the dam and the short road leading from the dam to the Upper Works parking lot at Tahawus be classified as Primitive rather than Wilderness.

Below is a map of the Lyon Mountain tract. Click here to view other maps and documents related to the 2009 State Land Classification Proposals. 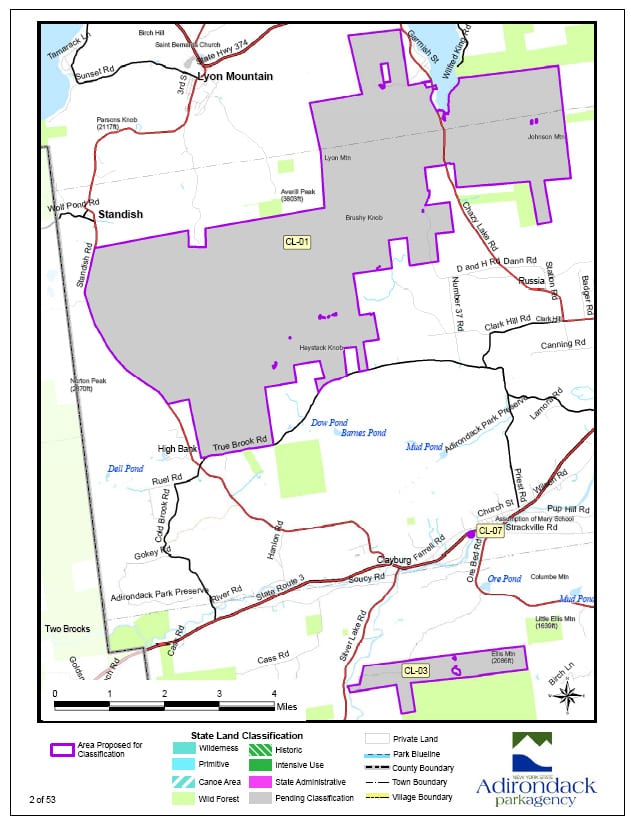