With snow scarce in much of the Adirondacks, two skiers head to the Cranberry Lake region for a day of backcountry adventure. 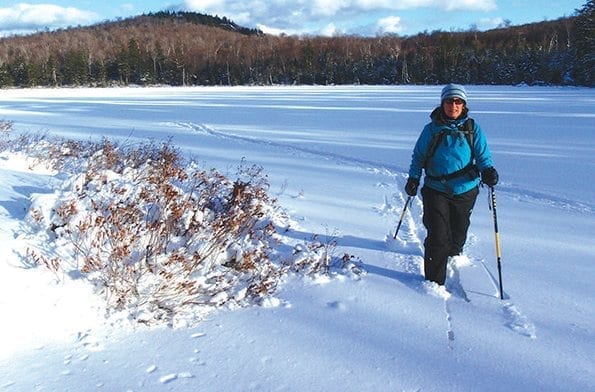 As usual, we were chasing snow. In the High Peaks, we didn’t have enough base to ski the backcountry, but we were hoping that a recent lake-effect storm had dumped powder in the western Adirondacks. So we called Rick Kovacs at the Wanakena General Store, and he told us the good news: the region had a foot or more of snow, much of it fresh.

Carol Fox and I decided to ski Cat Mountain, a 2,261-foot summit with a spectacular vista of the Five Ponds Wilderness. I had never skied Cat, but I thought it would be a good test for our Madshus Annums, a wide but lightweight ski designed for backcountry adventure. Both Carol and I had bought Annums a few weeks earlier.

When we got to Wanakena, we stopped at the store (which, alas, has since gone out of business) to buy sandwiches and hot chocolate. Our initial plan was to ski the Dead Creek Truck Trail 4.5 miles to Sand Hill Junction, take the Cowhill Junction Trail 0.9 miles to a spur trail for Cat Mountain, and then follow the spur 0.6 miles to the summit—a twelve-mile round trip. Rick suggested that we could save a little time by leaving the truck trail early and cross frozen Dead Creek Flow to Janack’s Landing. The short cut would save us only three-tenths of a mile, but we welcomed the opportunity to check out the views from the flow, one of several tentacles of Cranberry Lake.

After signing the register, we headed up a corridor of evergreens coated in white and were immediately struck by the beauty and quiet of the Five Ponds Wilderness. “It’s so pretty. It’s like a magical forest of snow,” Carol remarked.

In a few minutes, we came to the first of several beaver ponds and meadows on the way to Dead Creek Flow. These snow-covered clearings, adorned with leatherleaf shrubs and ghostly trees, offered welcome changes in the scenery. Beavers have long been active along this trail. I told Carol how years earlier—the last century, in fact—I had been hiking in the dark without a headlamp and waded shin-deep into water that had flooded the trail, prompting a beaver to slap its tail in alarm.

The truck trail is almost perfectly flat. We certainly didn’t need our wide-bodied Annums for this part of the trip. But kicking and gliding through several inches of light powder, we would have been happy with barrel staves strapped to our feet.

After a mile and a half, we could see a bay of Dead Creek Flow on our left. Following Rick’s advice, however, we kept going five or ten minutes until we reached a path for a primitive campsite. This provided easy access to the ice. Needless to say, you shouldn’t venture onto Dead Creek Flow unless it is frozen solid (the ice should be at least three inches thick).

The sky was overcast as we skied a half-mile or so through light powder on the ice. Looking down the flow toward the main body of Cranberry Lake, we felt enveloped by a cocoon of white. We headed southeast toward an obvious opening in the shoreline: Janack’s Landing, named after John Janack, one of the first firewatchers on Cat Mountain (when Cat had a fire tower). In the early 1900s, Janack lived in a cabin at the landing with his wife and children.

Once on shore, we stopped for lunch at a lean-to and then took a short spur trail through a swamp back to the Dead Creek trail, where there was a kiosk with a map and register. (By skiing across the flow, we had avoided a large bend in the trail.) We had come about two and a half miles but had yet to gain any elevation. Shortly after leaving the kiosk, however, we began a gradual climb to Sand Hill Junction, ascending 150 feet in roughly a halfmile. We turned left and continued to climb intermittently for 0.4 miles to Glasby Pond. Its outlet, Glasby Creek, was pouring through a beaver dam.

We arrived at the pond at 3 p.m., just as the afternoon sun was coming out and casting long shadows across the frozen surface. Looking east across the pond we could see our destination, Cat Mountain, about a mile away. Alas, it seemed too late in the day to continue our journey. Carol said she wouldn’t mind turning around after exploring the pond.

The water body is named after Nick Glasby, one of the early hunters and trappers in the Cranberry Lake area. The two Nick’s Ponds in the region also are named for Glasby. Bob Marshall, the celebrated hiker and wilderness advocate, spent a summer visiting ninety-four ponds in the region and regarded one of the Nicks Ponds as the loveliest of them all. He had a lower opinion of Glasby Pond, putting it sixty-second on his list. If only he had seen it on a bluebird winter day like this, with Cat Mountain looming above.

“Yeah, the Great Glasby,” I replied.

The ice can be thin near the beaver dam, so the safest way to access the pond is to cross the little outlet and approach the shore far from the dam. You may have to remove your skis to cross the stream on rocks. Carol and I skied to the north end of the pond to check out a marsh and another beaver dam, marveling at the scenery and the stillness. “The light is beautiful; we’re so lucky,” Carol said.

As much as we disliked leaving the pond, we were looking forward to the descent back to Janack’s Landing. In all, the elevation loss was only 260 feet, but we enjoyed schussing in our new skis through the fresh powder. The downhills were not especially difficult, but they might test a raw novice. If conditions are favorable, I’d rate them as “advanced beginner.”

It took us a half-hour to cover the mile and a half to Janack’s. By then the sun had dropped to the horizon, suffusing the eastern shoreline of Dead Creek Flow in a pink glow. Back on the truck trail, we kept a steady pace and got out of the woods a little after 5 p.m.—nearly five hours after we had set out. We capped off the day with hamburgers and beers at the Pine Cone Restaurant, the local eatery.

“That was an amazing trip, and we didn’t see a soul,” Carol said. “Wanakena is such a cute little town. I can’t wait to come back.”

Next time we’ll start a few hours earlier and make sure we get to the summit of Cat. The mountain will still be there when we return. 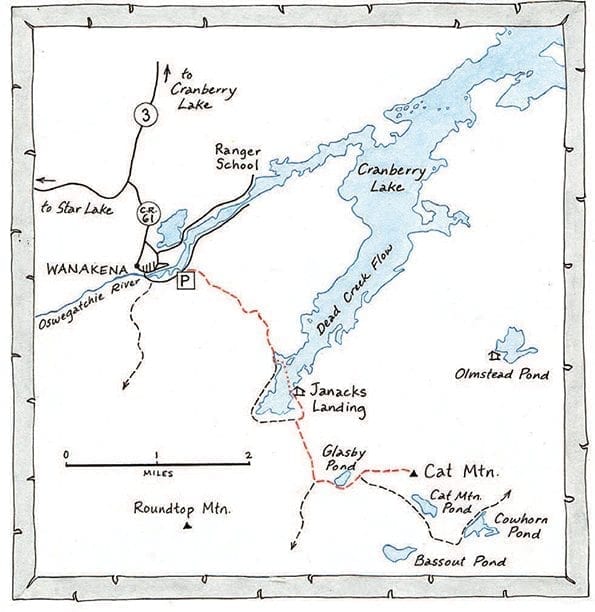 DIRECTIONS: From the bridge over the Oswegatchie River just west of Cranberry Lake, drive 6.8 miles west on NY 3 to County 61, the turn for the Wanakena Ranger School. Bear right at 0.8 miles, where the main road bends left. In another 0.4 miles, bear right again onto South Shore Road and cross the Oswegatchie. The parking area for the Dead Creek Trail is on the right a halfmile beyond the bridge.