A longtime street runner takes to Adirondack trails for a change of pace.

I ran cross-country in high school and have continued this interest into my adult life with daily runs, numerous 5K races, and two half-marathons. But in mid-May, I attempted my first trail run. Running on trails rather than roadways (or, yes, a treadmill) never occurred to me in a lifetime of visits to the Adirondacks. And in that time, trail running has become mainstream. The 2016 report from the Outdoor Foundation put the number of runners at almost 8.1 million nationwide, up 10 percent over the last three years.

Saranac Lake trail runner Sarah Keyes, who has been doing it competitively for the past three years, says it’s a way for recreational road runners to take the next step. For her, the concentration needed allows her to “push everything else out of my head and just think about the trail.”

“I love it because it allows me to cover a lot more ground faster in the mountains,” she said.

Make sure to get a proper trail running shoe with a good platform, stability and traction, she said, because better footing will make you more confident.

A couple good places to start out, according to Keyes, are Henry’s Woods, Mt. Pisgah’s mountain biking trails, and the VIC at Paul Smith’s College. When you’re ready for more, she suggested Marcy Dam on the truck trail, which is about 7 miles round trip.

Since it was my first time out, I needed something short and flat. On the advice of Editor Phil Brown, I settled on a 1.5-mile trail to Clear Pond, beginning at the Outer Gooley Club. The round trip would add up to a three-mile run—just less than a 5K.

I learned a few key lessons along the way about trail running, including keep an eye on your feet and the terrain pretty much all the time (I caught a rock on the old logging road that makes up the first 1.2 miles of the trail and flew Superman-style before landing flat in the dust. Luckily, nothing was broken and no one was around to see.). Lesson 2: if you’re running during black-fly season, be sure you’re in shape to run without stopping. Because when you stop, they swarm. But I don’t need to tell you Adirondackers that.

The idea of running on this particular trail was exciting, since it is one of the lesser-publicized parts of the Finch, Pruyn acquisition, a shortened version of the four-mile trail to Pine Lake. It has only recently been added to the Forest Preserve and opened to public use.

Before arriving at Chain Lakes Road, I stopped at Stewart’s in Indian Lake and watched the black flies swarming and throwing themselves against my car windows and windshield. When I drove away, they didn’t disperse until I reached twenty miles per hour. How fast could I run today?

Driving east, Chain Lakes Road is just before the bridge over Lake Abanakee—the one with the giant white Adirondack chair at the entrance. You need to travel 3.9 miles down this road to reach the trail. It’s a slow drive, since the road turns to dirt after about a mile. You’ll pass a couple of parking areas before you get to the right one. Finally, I arrived at the red metal vehicle barrier near the building that was the Outer Gooley Club. I parked and took a good spray of Deep Woods Off with 25 percent DEET.

During the drive in, I wondered what sort of animals I might encounter in this remote location. Moose? Black bears?

It was horses. I saw the piles of dung before I actually saw the three horses—with riders—come back down the trail toward me. It reminded me I should get one of those animal scat books. And it was another reason to watch my feet.

The trail, a wide former logging road, had a few ascending sections but was mostly flat. Great for an easy run. A nice breeze picked up as I ran, keeping those black flies out of my way. I immediately noticed the difference in the running experience, surrounded by woods, the babble of a stream, and sounds of birds. Rocks and roots had me watching my feet, and blowdown in three spots forced me to stop and go around or over the trees and branches.

At 1.2 miles, I came to the trail to Clear Pond on the left. Marked by yellow disks (the road has blue ones), the path narrowed considerably and suddenly came to a steep uphill. The trail was still covered in wet leaves and occasionally blocked by fallen trees, making it difficult to know at times whether I was still on route. And those black flies were waiting every time I stopped to climb over branches or check for the yellow markers.

What happened to my easy run?

I ran and stopped and sprayed. Ran, stopped, sprayed. 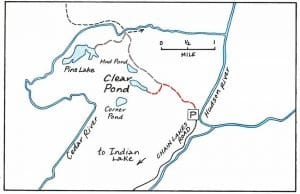 Thankfully, it was a short time before I arrived at peaceful Clear Pond. I stepped onto one of the large flat rocks at the shoreline to take photos of the pond and wooded hills beyond. The black flies didn’t disappoint. They brought my leisurely sightseeing to an abrupt end, and I started my run back.

I was quickly back at the logging road, where I took the aforementioned fall. A small scrape and good story to tell later.